What Are The World's Oddest Creation Myths?

Susan Hayes answered
Explanations on how the world came to be can be found in almost every culture and faith and vary from the traditional to the truly unusual.  From giant eggs to homicide, these tales of the world’s beginning are more than a little strange. 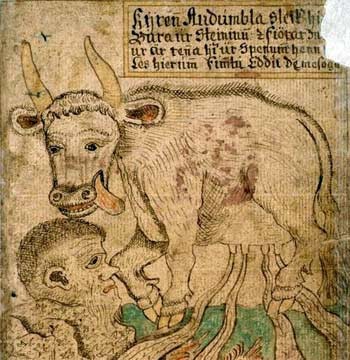 In the beginning there was nothing but the ice of Niflheim in the north and the fire of Muspelheim in the south.  The empty gap between them was known as Ginnungagap and was a void where the few stray bits of ice could sometimes meet with sparks of flame.

These ice fragments melted and eventually, if inexplicably, formed a hermaphrodite giant named Ymir and a cow. This was convenient, because the giant was able to survive by drinking  milk from the cow’s udders, while the cow in turn was able to survive on nothing but rime ice. The cow eventually uncovered a man as she consumed the ice, and he joined them once she had licked him free.

Through means that are biologically boggling, both the giant and the ice man fathered several children, who then took to fighting and murdering each other. Eventually Ymir the giant was slain, and his children used his body to create the universe in one of the most macabre funerals you can imagine.

His flesh they ground into dirt, and the maggots that appeared in his flesh because the dwarves that lived beneath the earth. His bones were transformed into mountains, and Odin strew his father’s brains into the sky to become clouds. Four of the dwarves were chosen to hold aloft Ymir’s skull for eternity, and so was created the heavens. 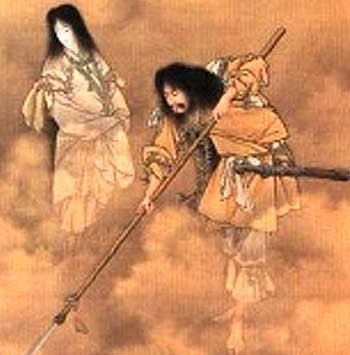 The Japanese gods created two divine beings and assigned to them the task of creating the first land. One could wonder why gods capable of creating divine beings needed to delegate the whole land thing, but questioning gods is really never a good idea.  Izanami no Mikoto ("Exalted Female") and Izanagi no Mikoto ("Exalted Male") were thus created and sent down to poke about the ocean with a jeweled halberd until they stirred up what turned out to be land.

Pleased with this freshly churned up bit of sod, they moved in and eventually decided to have a family. From their unions came the eight great islands of Japan, each one birthed by Izanami in what must have been the strangest set of known pregnancies.  They also were responsible for the creation of the Kami, the natural forces or spirits.  Izanami died giving birth to the Kami of fire, whose destructive nature did terrible damage to its mother at the moment of creation. In her death throes,  Izanami continued her fertile ways, creating more Kami from her feces, vomit and urine, and one last one created by her dying tears of pain and suffering. 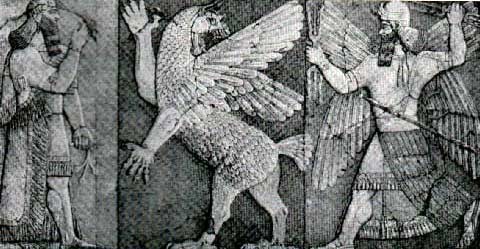 Babylonian tales begin with three gods, Apsu,  god of fresh water,  Tiamat, goddess of salt water, and Mummu,  the god of mists.  All this water was sloshing about, mingling and having a good time while Apsu and Tiamat got together and spawned two gods who grew up and spawned more gods,  all of them swimming about in a massive body of water without so much as a tropical beach to break up the monotony of endless waves.

Eventually there grew to be so many gods and goddesses bobbing abut that they got loud and unruly. Apsu went to his mate Tiamat and suggested that the only way they were ever going to get a good night’s sleep again was to slay the whole lot of them.  Naturally Tiamat got a little irate at this suggestion, told Apsu to never suggest such a thing again and went swimming to clear her head.  While she was gone, Apsu decided she’d come around eventually and got on with planning to kill off his entire family in the name of peace and quiet.

The younger gods soon learned of this plot and were terrified, but their leader Ea hatched a scheme to save all their lives. He cast a spell on his grandfather Apsu, ripped his crown from his head and murdered him.  Ea then built a palace on Apsu’s waters, hooked up with the goddess Damkina and fathered Marduk,  a four eared, four eyed giant who controlled rains and storms.

Now that the threat was over, the other gods spent no time in getting together and selling out Ea to their grandmother Tiamat, complaining that Ea had slain their dear grandfather. Angry, Tiamat mustered an army of dragons and terrible monsters to go after Ea.  Marduk offered to defend his father on the condition that if he won he, Marduk, would rule the gods instead of Ea.

The battle raged and Tiamat’s army fell before Marduk, leaving the two gods to face each other. Eventually Marduk was victorious, and he cleaved his great grandmother’s water laden body in half with his club.  Half he put in the sky to make the heavens, and half   he carved into land, which he lay over her husband Apsu’s fresh waters, which bubbled through her corpse as springs and wells.

Those gods who had supported Tiamat were assigned labours in the newly created world, working the fields and land.  Soon though, they rebelled, and Marduk decided the solution was to slaughter Tiamat’s general Kingu.  Marduk mixed the general’s blood with clay and spittle collected from the other gods, and created humans from this disgusting muck. Humans were then made to do all the tasks the gods did not wish to do anymore, and were expected to pray to their creators in thanks for the lives they had been given. 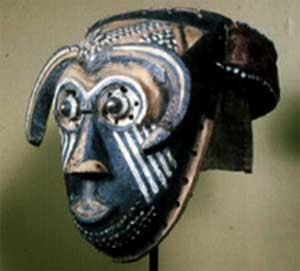 From central Africa, the Bakuba have their own account of the beginning of the world.

Originally the Earth was nothing but water and darkness, ruled over by the only living thing, a giant named Mbombo.  Time passed in this dark dank kingdom of one, and very little happened until one day Mbombo felt a terrible pain in his stomach.  The cause of this indigestion was revealed when he vomited up the sun, moon and the stars.

Having regurgitated this brilliant source of heat and light, the giant watched as the sun evaporated the water of his kingdom away, creating clouds and eventually revealing dry hills and land that emerged from beneath the water.  Indigestion struck again, and this time Mbombo vomited up a colourful collection of life.  The first man and woman emerged from his bile, as did animals, trees, medicine and other wondrous things.  The first woman went to the east, and her son Woto became the first king of the Bakuba. 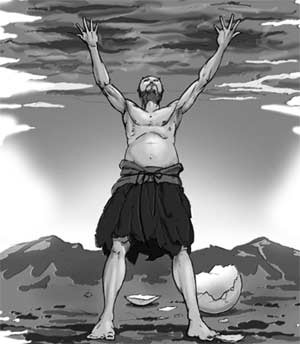 According to one Chinese myth the world started off as nothing but formless chaos, like a high school student’s locker right around the end of the school year. Somehow this chaos coalesced, forming a cosmic egg containing the opposing principles of Yin and Yang.  It took 18,000 years, but eventually the two principles worked out their differences and became perfectly balanced. At that moment, a primitive giant covered in hair, sporting horns and a stylish fur wardrobe hatched from the egg. His name was Pangu.

Having just been born, Pangu didn’t spend any time doing the usual childhood things, but instead set about creating the world.   He cleaved Yin from Yang with his giant ax.  Yin became the Earth, and Yang the sky.  To ensure the two principles never got together again, he stood between them and pushed up the sky. For 18,000 years he pushed; each day Pangu grew 10 feet bigger, the sky 10 feet taller, and the Earth 10 feet wider.  This task took a terrible toll on Pangu, and when it was finally done Pangu died.  In and act that made him into the world’s first organ donor,  Pangu’s body was then transformed into the world as we know it. His voice was transformed into thunder, his right eye the moon and his left eye the sun.  His breath became the wind and his body became the mountains.  Rivers were formed of his blood, muscles became farmland, bones became minerals and the bone marrow became sparkling diamonds.  His facial hair became the stars, his fur the flora of the world, and the fleas on his fur became the animals.