Archangel Gabriel
Gabriel is the highest archangel whose name means ‘God is my strength’, and is often referred to as the leader of the angels as he acts as God’s personal messenger.
He is also often called the chief of the four favoured angels and the spirit of the truth, a reference to his duty of delivering the messages of God.
Gabriel is also the patron saint of diplomacy. He first appears in the Bible in the Book of Daniel where he is delivering explanations of Daniel’s visions. In the Gospel according to Luke, Gabriel is portrayed as predicting the births of both John the Baptist and Jesus. He is also one of the only two (possibly three) angels named throughout the entire Bible.

Archangel Michael
Michael is another archangel who is mentioned by name in the Book of Daniel, the Book of Jude and the Book of Revelation. In the latter he leads the army of God against the Devil during his uprising. The name Michael means ‘who is like God’ which has lead to much debate about the underlying meaning.

Archangel Raphael
Raphael is often listed as being the third archangel. His name means ‘it is God who heals’ or more simply ‘God heals’ which explains why in Judeo-Christian traditions in performs all manners of healings.
An angel by the name of Raphael appears only appears in the Deuterocanonical Book of Tobit which is considered canonical by Roman Catholic and Orthodox Christians.
A feast day for Raphael was first introduced by the Catholic church in 1921 and is celebrated on 24th October. Raphael is the patron saint of many things, all of which have some relation to medicine or healing.

Archangel Uriel
The archangel Uriel, whose name means ‘God is my light’ is one of the archangels of post-Exilic Rabbinic tradition, and also of certain Christian traditions.
When a fourth archangel is added to the previous three to represent the four cardinal points, Uriel is the fourth archangel to be mentioned.
The scriptures that Uriel appears in depends upon which religion’s scriptures you read although he appears in the Second Book of Esdras (sometimes called Esdras IV in Catholic versions) and he is also listed as the third angel in the Testament of Solomon. Uriel is the patron saint of the Sacrament of Confirmation.

d ds answered
The four favored angels are Gabriel, Michael, Uriel and Raphael. These angels were created by god to stand on the corners of his throne and each have unique special powers. 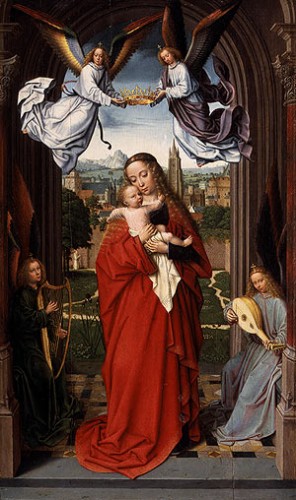 Michael is made up of snow, and Gabriel is made of fire. Michael is the guardian angel of the nation of Israel. Gabriel is God’s messenger, and he is sent to Earth to carry out various missions and instructions of god.
Uriel is called the light of god and he served as the medium that was used to transmit knowledge from God to man.
Raphael is the angel of healing and he is one of the seven archangels.

Lucifer was in charge of the worship in heaven like a second in command. He challenged God, and all the angels watched. Some were for Lucifer some were for God, and many waited to see who would win so that they could side with the winner.
When God kicked Lucifer to hell, he sent not only Lucifer's angels but also those who were neither for him or against him, keeping only those who were loyal to him.

Anonymous answered
Gabriel and Micheal are the only angels named in the Bible.

Anonymous answered
Raphael and Lucifer.  Raphael visited Mary in a dream telling her of her impending motherhood of Jesus.
Lucifer was the fallen angel who battled with God and was eventually cast from Heaven.

Anonymous answered
Just to make something clear, the Catholic faith's Bible came well before the Protestants' version.
The original books were written by the Jews, and the later by followers and apostles of Jesus (aka the founders of Catholicism).
So even if you disagree with the way Catholics do things you must understand that their book is more complete.
If you are Protestant, whether you want to admit it or not, that came thousands of years after Catholicism you should ask yourself why your book differs from the one made by those who actually followed Jesus.

Eric Lur answered
On the subject of Lucifer:

Lucifer is NOT Satan/Devil. Lucifer's name has been tarnished through centuries of inaccurate translations of the scriptures.
Even his Wikipedia entry explains how his name became associated with the Devil. Lucifer's name means "The Light Bringer". He is the one who brings knowledge. He enlightens. He is knowledge, and all that is true.
Lucifer is the most powerful of all of God's Angel's and is God's right hand. He tests people's faith in God. He was sent by God to test Adam and Eve. He tests our faith at times of sorrow and time of joy. He can be seen every single day, rising in the East, illuminating our planet and sustaining life.

Lucem Ferre - to bear the light