Who Are The Most Violent Deities?

Luis Prada answered
We all tend to believe that Gods are all benevolent beings that watch over us and care for us like only the most loving parent could. Nope, not at all. Most Gods are extremely violent lunatics that are vain, self-centered, and did we mention they were violent lunatics?

Here are some of the most violent. 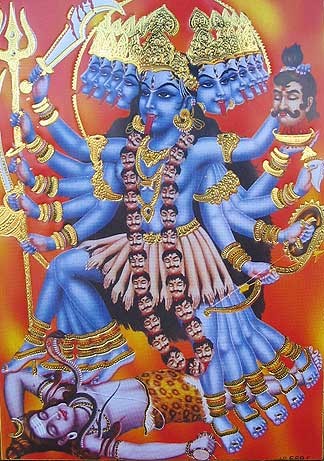 In the western world we are used to our Gods being benevolent and kind, with a bit of an angry streak. In Hinduism, they have an onslaught of Gods that should have their own adults only comic books. Take, for instance, Kali, the Hindu goddess of fertility. You’d expect the goddess of fertility to be motherly and sweet, but that’s only if your religion has no imagination. Like Buffy, Kali is a Slayer – a slayer of demons. She is the mother of all life and…well…if this were a movie poster we would say “She’s the mother of all life, and the bringer of death.” For a silly as they sounds, it’s true because Kali is also the goddess of death.

Anytime you see Kali there is a good chance that she’s sporting an elegant dress fabricated from the arms of many dead men, a necklace of human skulls, and she uses cobras for bracelets. You can also tell it’s her because, well, she’s blue and has a ton of arms – but also because of patented sticking-out-tongue look. 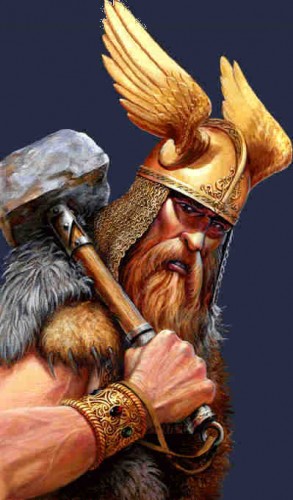 Sure, you’ve heard the name a thousand times, but do you know how truly badass this God of Thunder is? First of all, he drives a chariot. Sure, nothing special, right? Yeah, you think that until you saw a gigantic man (compared to humans) with a huge red beard charging your way in a goat drawn chariot. A goat drawn chariot that literally set the world on fire everywhere it went. Now, imagine this huge bearded man charging at you in his flaming goat chariot as he wielded a massive hammer (named Mjöllnir) that fired lightening. If you didn’t soil yourself just by reading that there is something wrong with you.

Thor wasn’t really an angry god, per se. He was more of a bar brawler – the kind of guy that no matter how terrifying he looked, people always seemed to mess with him. Granted, many of these people were giants that made Thor look like an infant, but still. A lot of Thor’s stories share similar themes, and by “similar themes” we mean someone messed with Thor, Thor finds them, Thor kills a giant even if they had nothing to do with anything. That’s just how Thor rolls. 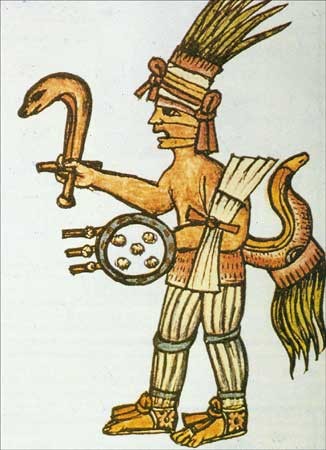 Huitzilopochtli is the Aztec god of the sun, as well as the god of war. It’s safe to say that this god’s story is a little…weird. First of all, his mother was a goddess. Nothing strange about that considering who were dealing with here. But his father…his father was a ball of feathers. We’ve tried looking it up, but we can quite figure out the significance of that. Anyway, Huitzilopochtli’s sister became enraged when she discovered that her mother was impregnated by a ball of feathers because not only is getting pregnant by a ball of feathers a thing that can happen, but it’s something that’s frowned upon. When ths sister discovered this she attempted to kill her mother.

Huitzilopochtli was not going to sit idly by in his mother’s womb and just let his sister kill his mom!  So he did what any respectable baby would do in such a situation – he ripped out of his mom’s womb as a fully grown man in full armor. For plotting to kill his mother, Huitzilopochtli killed his own sister (whom, we assume, he had just met for the first time), chopped off her head and threw it in to the sky, where it became the moon so his mother could see it every night without having to worry about getting stabbed. Probably after realizing that he had the power to create objects in space out of human bodies, Huitzilopochtli then tracked down about 500 of his brother, killed them, and then through their bodies in to space, where they became stars. 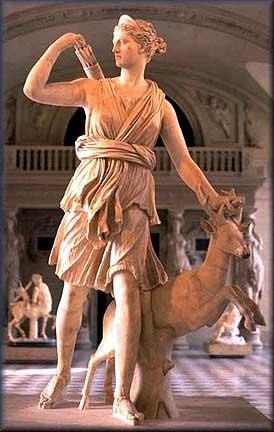 The Greek goddess of hunting, nature, and chastity is one violent lady. In nearly all of the stories she’s in have her doing nothing but feeling insulted and then killing the people that she felt insulted her. She has a short fuse and really, really does not want to deal with your crap. Just imagine how many bodies you would have left in your wake if you murdered a person for any menial little transgression you experience every day? Yeah, Artemis was that kind of lady.

Some of her greatest wrathful moments include, killing her follower Marea and transforming her friend Callisto in to a bear because they both lost their virginity. But it doesn’t stop there. No, it gets waaaay more petty. Artemis and her brother Apollo once took offence to the Theban queen Niobe feeling a sense of superiority due to the fact that she had 14 children – 7 boys, 7 girls – while the mother of Artemis and Apollo only had one of each sex. Feeling that no one should feel superior to their mother, Artemis and Apollo mercilessly killed all of Niobe’s children. ALL OF THEM. They didn’t kill Niobe. They killed her kids. That’s messed up. Of course, some versions of the story have Artemis and Apollo killing all but one of each sex to make it even so Niobe could no longer boast, but, really, altering that little fact doesn’t necessarily make you look at this godly brother and sister tag team of crazy in a different, kinder light.

But if you really want to reach the summit of Artemis’s pettiness-driven murdering then look no further than the story of Artemis and Chione. Chione was guilty of committing the sin of being too pretty, which, at the same time, committing the even greater sin of possibly, maybe, kind of, sort of, being prettier than Artemis herself. If you really need to ask what Artemis did, than you have not been reading any of this. Artemis killed Chione with a poison tipped arrow. Chione’s mother was so distraught by the death of her daughter that she flung herself off of a mountain to kill herself – but not before Apollo decided to be an even more terrible person than usually by turning her in to a hawk before she it the ground; leaving Chione’s mother to live out the rest of her days as a very morose little hawk.

This giant, and Celtic god of the underworld had one particular power that allowed him to rule with an iron fist: His literal evil eye. Sure, we all talk about someone giving you the “evil eye” at some point, but so rarely (read: Never) can this person’s “evil eye” actually kill you.  Balor’s did. Luckily for most people living around him, Balor only opened his one eye when he was more than a little bit ticked off.

Balor’s stories are packed to the gills with one eye opening kill after another (Get it?!!?), but it most violent act wasn’t even a kill at all. Balor had a daughter named Ethlinn. Ethlinn was pregnant with a child that was prophesied as being the savior and defeater of Balor. Obviously, when you hear that someone who will soon be born will one day kill you, you kind of want to do something about it. What’s that you say? You wouldn’t do anything to them? Well, it would make sense to you if you’re a crazy evil lord of the underworld. Sadly, so few of us are. We may never get to understand the other side of that argument. In a half-assed attempt at preventing his own death via the hands of his own grandson, Balor imprisoned his not-yet-pregnant daughter in a tower made of crystal. Cian, an all around good guy and fighter of evil, broke in to the tower and impregnated Ethlinn with triplets. Balor found out about the triplet and tossed them in to ocean…except for you that was saved.

The one was named Lugh. Lugh eventually grew up and fulfilled his prophecy – he killed his grandfather by tosses a spear in to his big, stupid eye of death.

Stewart Pinkerton answered
For sheer ultra-violence, you can't really beat Shiva - the shatterer of worlds. Even beats the God of Judaism, Islam, and Christianity, who took great delight in drowning all life on Earth apart from his favoured family and their pets.

Daidipya Ghodnadikar answered
If you don't know anything about hinduism then you have no right to talk about our god and goddess.You have rotten head and you are just stealing information from search engines and submitting it.Use your mind don't play with others feelings.Our gods are great and lion hearted..All you've said about Kali mata is lie..She Kills only bad parts of society....Every countries army do same thing they kill enemy or bad elements of the society to maintain peace.You should not talk about any god like this..