Why Does Breaking A Mirror Bring 7 Years Bad Luck?

Anonymous answered
This is not true. Don't let these stupid little things rule your life. You are the creator of your own life. Whatever happens in your life is only because of you. You make decisions for yourself. Think for yourself, can a mirror control your life. I know that this has been a major issue but its not true. You create your own luck. I've broken a mirror so many times; not once, not twice, not thrice but more that that. I broke them 10 times in my life and I'm having a very good life. It only causes bad luck for the people who believe in it because they have the guilt inside them and they don't focus on what they're doing. Use you brains!

E Jacobson answered
It has not been scientifically proven that breaking a mirror does indeed bring bad luck, but many people still believe this superstition to some degree or another.
It stems from ancient belief systems, which held that if you saw your reflection, you left part of your soul behind when you turned away from it.
Pre mirrors, the reflection could only be seen in a pool of water, but after mirrors were invented, some people feared that if the glass in a mirror were to break, their soul would be lost.
The bad luck was thought to last for 7 years because people believed that the body, mind and soul changed completely every seven years. At the end of the 7 year cycle they came together again for a new beginning.
So seven years after breaking the mirror, your soul would be returned to you and a new cycle could begin again.

Arun Raj answered
Breaking a mirror does not mean anything if you look at it practically. It is an age-old superstition which says that you can invite 7 years of bad luck, if the mirror breaks. Due to the reflective surface of the mirror, people assumed it to have magical power. In fact the mirror is even known to 'reflect' your future. If the mirror breaks, it supposedly means 'breaking your future.' According to the old wives' tales, the only way you can reverse the bad luck is by burying all the broken pieces and fragments deep inside the earth. Another line of superstition associated 'breaking of a mirror' with a death in the family.

On a practical note, yes; the mirror can give you bad news. You may just have to stop and collect the pieces to dispose them. You may also have to loosen your purse-strings to shell out money for a new glass piece or glass ware.

Jennifer Bone answered
Most people are aware that breaking a mirror carries a sentence of 7 years of bad luck. This can be traced back to the Romans who were the first to make glass mirrors. They held the belief (as did the Chinese, Africans, Indians, and Greeks) that any distortion of one’s image could mean a corruption of the soul. If a mirror broke then the reflection or soul would be trapped in the mirror’s ‘world’. So, the broken soul would lead to broken health. Many people still believe, as the Roman’s did, that the human body undergoes a renewal of sorts every seven years. Therefore, the broken mirror’s effect would last until the soul had fully restored itself. 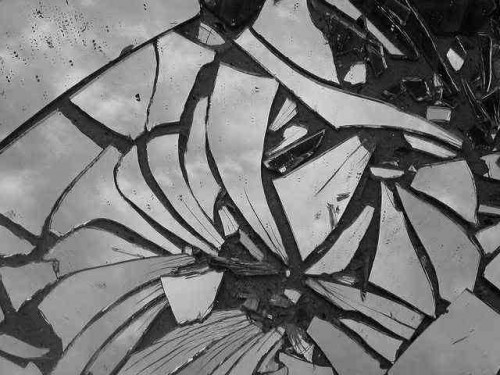 There is a theory that you can do penance to counteract the negativity produced by the breaking of the mirror. The rituals that are involved include grinding the entire mirror to dust – the remove the possibility of any reflection remaining. Some believe burying the broken mirror pieces by the light of a full moon, under a tree will do the trick. African slaves in the USA would place the pieces of mirror in a river that flowed south.

Anonymous answered
Breaking a mirror was meant to give 7 years bad luck because years ago, if a maid broke a mirror, her Master would take payment from her wages and where mirrors were so expensive she would be paying the money back for 7 years.