Are There Really Patron Saints For Everything?

Luis Prada answered
Oh, yes. There are tons, and tons of Saints – too many to tabulate, really – and they all represent a certain aspect of life, or a certain object in life, or anything in life. It almost seems like as soon as humans create a new thing, there is already a saint lined up for it. So there may already be a Patron Saint of Sham-wow’s, or at least, the Patron Saint of Extra Absorbent Infomercial Products. 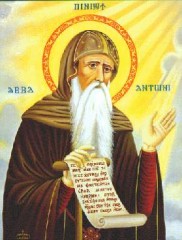 Known as the Patron Saint of gravediggers, Anthony was a Christian monk that just couldnt’t catch a break with the ladies. He also hated boredom and laziness. To combat all of these problems he was facing, he holed himself up in a tomb where he ate very little and did nothing but pray.

Apparently, starving and praying are things that were fun
for him. To each his own, I guess. But I can’t help but think differently when I see one of those Christian Children’s Fund commercials with all the staving kids. They don’t seem to be having a rocking good time, but, then again, I could be very wrong. And if that’s the case, then why are we sending money to them? To fund their endless party in the dirt? Pfft, screw you starving kids!

One little known fact about Drogo is that he was a bit of a superhero. It is said that Drogo possessed the power to literally be in two places at once. Some accounts state that he had been seen going to church and working in the fields at the same time. This ability can also come in handy when you refuse to give up your party lifestyle. Perhaps getting a lap dance while you feed the homeless? 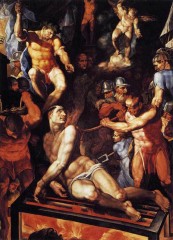 This is kind of what it means to be Saint Lawrence of Rome, whose existence proves 2 things: 1) to be Patronized (I guess that’s the proper way to put it) means you are remembered for that one thing that makes you memorable (even if that something is your death), and 2) sometimes being anointed a Saint can be very embarrassing and kind of mean.

In a time when Christianity was outlawed, Lawrence was the keeper of the churches riches and artifacts. Emperor Verlaine decreed that all high ranking church officials be killed. With the pope and some deacons beheaded, Lawrence moved up the list and became the leader of the church…and also the next to die. Knowing he was next, Lawrence handed out all of the churches treasures and riches to the poor, blind and ill. When it came time for the execution, he was asked for the rich stuff. Lawrence just kind of shrugged and pulled his pant pockets inside out.

Lawrence was then grilled alive on a giant barbecue called a gridiron. For that, he is now known as the Patron Saint of cooking and tanning. See? Mean. 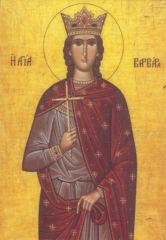 Barbra was the daughter of an overly protective pagan father
named Dioscorus, who kept his daughter locked in a tower to shield her from the horrors of the world. One day, Dioscorus went on a trip, leaving Barbara being in her tower.

In his absence, Barbara, after watching countless hours of Bob Villa reruns, built three windows in her tower to represent the Holy
Trinity. When Dioscorus returned, Barbara informed him that she had converted to Christianity. Dioscorus attempted to kill her with a sword, but a lot of weird magic stuff happened which caused the tower wall to break open. Barbara escaped, but was later captured and beheaded by her own fathers’ hands. Well, he didn’t do it with his hands because would be too manly for this lowlife. No, he did it with an axe…that he held… with his hands.

Having killed his daughter, Dioscorus went on his merry way; feeling pretty good about the whole murder of your own flesh and blood thing. He was struck by lightning and died.

From then on, whenever there was a lightning strike and someone needed a Saint to pry to, Saint Barbara was the name to invoke. But it doesn’t end there. As time when by, humans developed fireworks. These fireworks reminded people of lightning in the skies. Thus, Barbara become the Patron Saint of fireworks. 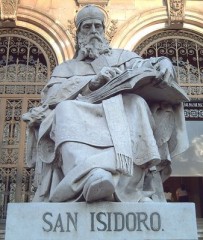 By the standards of the years in the 600s, Isidore was a complete idiot. By today’s standards, he is the guy that graduated high school 2 years early; graduated college 3 years early; and then retired at 28 so he could spend more time curing cancer and turning the moon in to a botanical
garden.

Isidore was a man of vast intelligence who wrote an
encyclopedia, a dictionary, and a book about the entire history of mankind (starting from the creation of man). All of this is entirely unimpressive to a family that already had 3 saints in it. Yeah, his two brothers and his sister were all considered saints in Spain. If you have trouble being noticed in your family, just think of Isidore and you’ll feel better.

One of his brothers, Leander, became tired of Isidore’s inability to learn as quickly as the rest of the family. Leander took it upon himself to teach Isidore everything there was to know about everything, even if it meant teaching with force. After awhile, Isidore became fed up, and ran away from home. He swore to make something of himself. 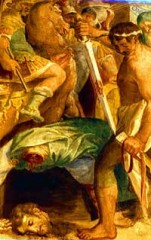 Genesius was, like many saints, a saint of many things like converts, and torture victims. The reason for these saint-hoods is pretty simple, as is his story.

Genesius was a struggling actor in Rome. After handing out his demo reel, and giving his head shots to anyone that would take them, Genesius finally landed an acting gig in a play that made fun of Christian Baptism. Just before he hit the stage, he was smacked in the face by God and he instantly converted to Christianity on the spot; he even asked to be baptized right then and there. This made the Emperor pretty angry, to say the least.

For his on stage conversion, Genesius was tortured and beheaded. And now you understand why he is the Patron Saint of converts and torture victims. What may not make sense is why he is also the Patron Saint of comedians. We guess because declaring that you want to be baptized in the middle of a play that makes fun of baptism is a pretty damn funny.

Susan Armour answered
The Catholic Church believes in praying to saints for everything, but if you read your Bible it says you are not to pray to anything above or below the ground. You should pray only to Jesus the son of God. We are all saints, if we are serving God. When the world ends, anyone who died will be raised to go to heaven if they were saved. Saints were good people, and eventually will go to heaven, but right now they are dead and buried just like anyone else who died.
They have no special powers to go to Jesus for you. The Bible also says The Dead No Nothing.
Whatever religion you are, start reading your Bible. The King James Bible, and not all these other religions. You will learn everything you need to know. Find a good Christian Church and a Bible Study Group.